I often tell people that Pitbull is my cousin. This isn’t true, of course. But I have a gift for bullshitting people with my dead-pan delivery and expressionless cara de mierda. It’s not entirely too far fetched that Armandito and I could be cousins, both being Cuban-Americans that grew up in Miami, both randomly screaming dale and both with an unhealthy obsession with Gloria Estefan.

But nonetheless, we’re not.

Last night I went to see el primo at The Forum, where he informed the crowd that he was honored to be at the home of the “Showtime Lakers.” ¿Cómo? This was my third show here and I had no idea. This is where Kareem Abdul-Jabbar and Magic Johnson played and Pat Riley coached and Jack Nicholson watched. Here. Wow. No wonder there isn’t a bad seat in the building. 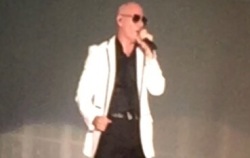 Back to Pit, he was amazing. Not because he is my cousin, but on his own merit. Se la comió in showmanship and possibly literally with two or three of his back-up dancers. The show had a rocky start with technical difficulties with the opening video presentation that was supposed to detail his personal story. Instead we got, Phil Collins’ In the Air Tonight followed by Roy Orbison’s Pretty Woman and then an abrupt entrance by Mr. Worldwide right into Don’t Stop the Party. Honestly, it was tremenda cagason, but he addressed it and moved on with full-force.

The crowd was on their feet for the entire show and I definitely hurt my back with overzealous twerking while dancing to Culo.

With so much tragedy and horror in the news, it was the perfect escape. Thank you primi.

He may be 305 ’til he dies, but his name will forever be in Los Angeles. Primo Mandy will receive a star on  the Hollywood Walk of Fame on July 15 rightfully in Celia Cruz Square.

The Bad Man Tour: Pitbull’s The Bad Man Tour featuring Farruko and Prince Royce is touring all over the country. Tickets are reasonable and available through Ticketmaster.

The Forum:  The home of the Showtime Lakers is at 3900 W. Manchester Blvd in Inglewood.