By birthright, I was told to pledge allegiance to Los Almendares – never the Habana baseball club. Later in my youth I was instructed to support our Cuban prince, José Canseco, and cheer on the Oakland A’s (even though he didn’t show up to his own street naming). Then, when Florida got a team it was all Marlins, all the time. It was the congeniality of Mr. Marlin Jeff Conine, the drama of Alex Fernandez’s torn rotator cuff, and the mantra of “I love Miami,” by Liván Hernández after the unlikely 1997 World Series win. They broke up the team and broke our collective hearts, but then in 2003, they brought back Conine and added Mike Lowell and a young pitcher named Josh Beckett and struck gold again, this time against the Yankees. I remember hitting pots and pans all night en la 49 avenida de Hialeah. And I remember the team and my heart being broken again. So, I gave up on baseball all together…until I moved to the city of angels. 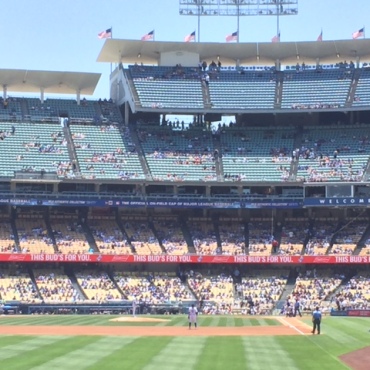 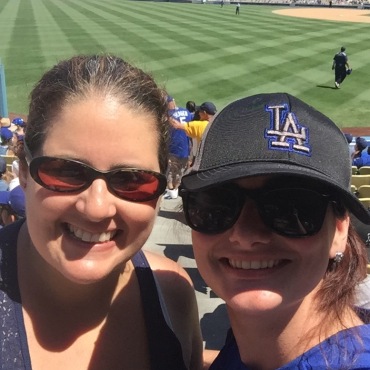 More than any other sport, and LA has very many illustrious teams, the Dodgers are an inevitable part of this city. The team lives in every neighborhood, gets into every club, is a regular at every dive bar, sits at the chef’s table in every fine restaurant, knows where to get the best chilaquiles, can order off of the menu in perfect Japanese, and can dance salsa. Its logo is everywhere and on everyone and before you know it, you own a Dodgers baseball cap and are wearing it out in public.

I knew I had to go to a game and properly be christened as a Dodgers fan, so I set a date: Cuban Heritage Day at Dodger Stadium, July 3, 2016.

Each year, the Dodgers dedicate one day to celebrate Cuban Heritage. Before the first pitch is thrown, there’s a pre-game vacilón complete with Cuban music, tons of booths with games and giveaways, and dancing. So much dancing.

Once inside the stadium, you get a camiseta and, if you’re lucky like I was this year, a big win (despite Yasiel Puig’s cagada of getting picked off of second base after a pop fly).

If you go: Dodger Stadium is located at 1000 Elysian Park Avenue.

Pro tip: Pineapple Dole Whips are served inside a pink or blue (your choice) Dodgers helmet in a stand behind center field.

Super pro tip: Don’t be una asquerosa and stick your patas in the cup holders.