No other place in L.A. personifies the word chanchullo like Hollywood Boulevard.

Half of the tourists are looking down at the names immortalized in thin gold letters, the other half are looking up for a glimpse at the world-famous Hollywood sign, meanwhile Batman and Elvis are desperately trying to get those distracted people to take a picture with them for a dollar or two. Over the music that blares from stores, street performers and musicians, there are approximately 3 tour companies on every block that try to get you to listen to their pitch as they hand you a brochure. And they are competing for attention and turf space, not with each other, but with Scientologists and Christians who also like to hand out pamphlets and Bibles, while inviting you to take a personality test or warn you about hell. The homeless panhandle everyone, except the occasional camera crew, as they know to stay out of their shot.

Although this place is una locura, there are pockets that are quite calm and lucky for hard-core Cubiches the stars of Cuban celebrities live in places that are far away from the chusmeria, but as colorful as una esquina Habanera. 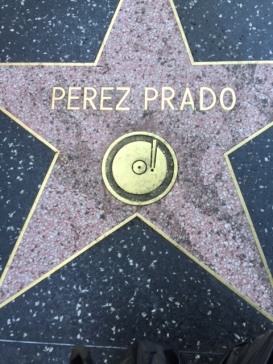 I grew up trying to imitate his signature belly scream, “Huuuh.” But it was no use. I still have the same album from my youth, Patricia,  on vinyl and play it when I write. Mambo No. 5 is his most recognizable song, but I prefer Cerezo Rosa or Maria Cristina. He was given the Recording Star (see the record symbol) in 1960 and it lives on 1529 Vine Street. 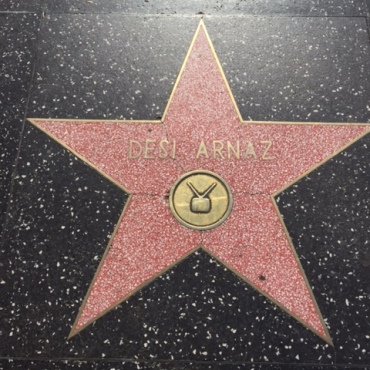 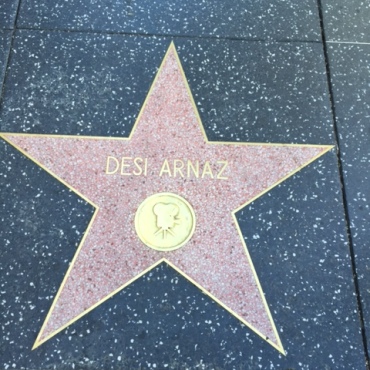 Desi Arnaz has the distinction of having two stars on Hollywood Blvd., one for Television and one for Motion Pictures. I was so fixated on Lucy that I took for granted the extraordinary feat of Ricky Ricardo’s character being on TV. After all, he looked and sounded like everyone I knew. He was given both stars in 1960, one lives on 6254 and the other on 6325 Hollywood Blvd. 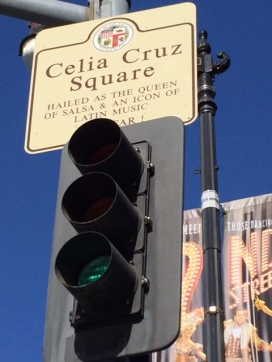 Walk toward the Pantages Theatre and look up. You’ll see a sign proclaiming the four corners Celia Cruz Square. The dedication happened two years after her passing in 2005. A few steps away from her square is her star, which she received in 1987. Unfortunately, due to construction, her star is temporarily inaccessible at the moment. But, when the sidewalk is open, you can see her star at 6240 Hollywood Blvd. 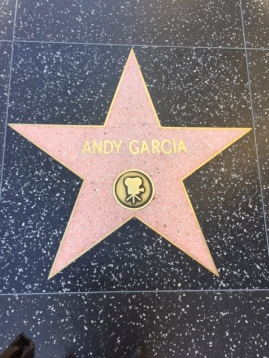 The list of Andy Garcia’s acting credits go on forever: The Untouchables, When a Man Loves a Woman, The Godfather: Part III and, my personal favorite, Carmencita’s boyfriend Pepe in ¿Qué Pasa, USA? To me Andy is like my childhood friend’s older brother, handsome with the perfect hair that sometimes plays percussion in a band. He’s so the coolest that his star has an awesome address: 7000 Hollywood Blvd. 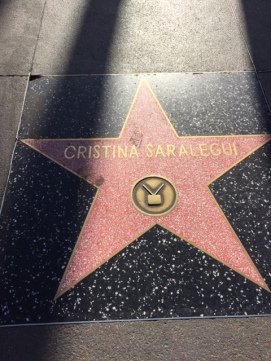 El Show de Cristina always ended the same way, with her signature thumbs-up and the Cuban saying Pa’lante, pa’lante, pa’tras ni pa’ coger impulso.  At the height of her career she was known as the Spanish Oprah and had 100 million viewers on Univision. She was given the star in 1999 and, although her show ended 15 years ago, her star continues to shine on 7060 Hollywood Blvd. 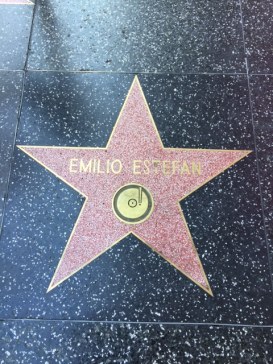 He’s the hit-maker and the padrino. I believe his Grammy nomination count is now up to 30. It’s no wonder that every Latin star, from Shakira to Marc Anthony seeks him out and is considered to be one of the most influential executives in the music business. But for me, he will always be the bearded guy jumping up and down while playing las tumbadoras in the Conga video who happened to be married to Gloria. He received his star in 2005 and it lives next to his wife’s on 7021 Hollywood Blvd. 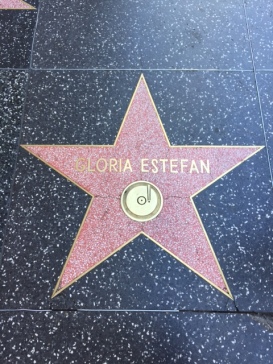 And now the best for last. There’s a discrepancy as to when she received her Recording Star, but the point is that she has one – and it’s very well earned. She has sold almost 100 million records worldwide and most recently was awarded the Presidential Medal of Freedom for her music. I’ve seen her in concert several times, know all the words to all her songs and keep a framed autograph photo in my office – because that’s what a good Cuban does. Her star is on 7021 Hollywood Blvd.

If you go: The Walk of Fame stretches 15 blocks, up and down Hollywood Blvd. The stars also run down 3 blocks on Vine Street, which is way calmer and has arguably the greatest musical stars, including The Beatles (in front of Capitol Records), Michael Jackson and Pérez Prado mentioned above.

Pro tip: Don’t make eye contact with anyone. Also, if you have to pee, the bathrooms inside LA LA Land are clean.