Regardless of your party affiliation or personal politics, it’s a universal truth that Ronald Reagan was the first Cuban president.

For many Cubans, Number 41 was a figure that perfectly embodied the United States’ promise of freedom and its far-reaching power. Ronald Reagan (more accurately pronounced RRRO-nal RRREE-gang) took office in 1981 and almost instantly imposed the travel ban to Cuba, sanctioned the Castro regime and put them on a terror list. And for many anti-communist, exiled Cubans at the time, this was music to their ears.

I recall my father being such a fan that he drove a car with a vanity plate commemorating Reagan’s inaugural well into the 2000s.

Clearly he was president during an extraordinary time in our nation’s history and, again, whether you lean left, right or don’t have an opinion (seguro que no eres Cubano), his library in Simi Valley is well worth the visit. So pack up a van with all of the Cubans you know and take the 101 to the 405 to the 118 and before the griteria is over, you’ll be at the Ronald Reagan Presidential Library and Museum.

Surprisingly, todo el mundo was on their best behavior. No political fights were had, but only because there was so much to see and take in. From his days in Hollywood to his governorship in California to his assassination attempt every room took you through a moment in history (and for many in the group major moments of their adolescence).

The most fantastic part of the museum is without a doubt the ability to walk into Air Force One. Not a replica. The actual plane that flew Presidents Reagan, Nixon, Carter, Ford, George H.W. Bush, Clinton and George W. Bush.

My mom was among the group and she seemed to be the most excited to be there. Perhaps because she too was a Reaganite or perhaps, like me, couldn’t help but be reminded of my dad.

If you go: Ronald Reagan Presidential Library and Museum is located at 40 Presidential Drive, Simi Valley. It’s about an hour away from L.A. on a good day. You’ll want to spend at least two hours at the museum. The outside grounds offer spectacular views and serve as  the final resting place for the former president and first lady.

Get tickets: You can buy your tickets ahead of time on their site reaganfoundation.org 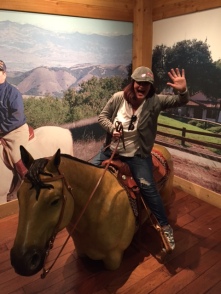