How far would you travel for a good flan de leche? Five miles. Maybe 10.

How far would you go for the best flan de leche in Southern California? The answer to that is 30 miles, because it’s the distance between the city of angels and the city of Orange.

Located on an adorable roundabout facing a small park is Felix Continental Cafe. The interior is un timbirichi with dated chairs and tables, and typical pre-Castro artwork adorning the walls. And at the precise moment I walked in, Willy Chirino’s Yo Soy Un Tipo Tipico blared over the speakers. ¡Como!

We found a table for two and sat ourselves down.

The menu is lengthy and features both typical Cuban and Spanish (which explains the “Continental” part) dishes. We ordered una palomilla and carne con papas both with white rice, black beans and maduros. The portions were generous and on point with how they should taste. No weird fusions or, more importantly, picante. At the top of the menu it stated that you could request your food spicy (at least it attempted to say that), but obviously you wouldn’t be eating Cuban food if you did (yes, I’m judging you). 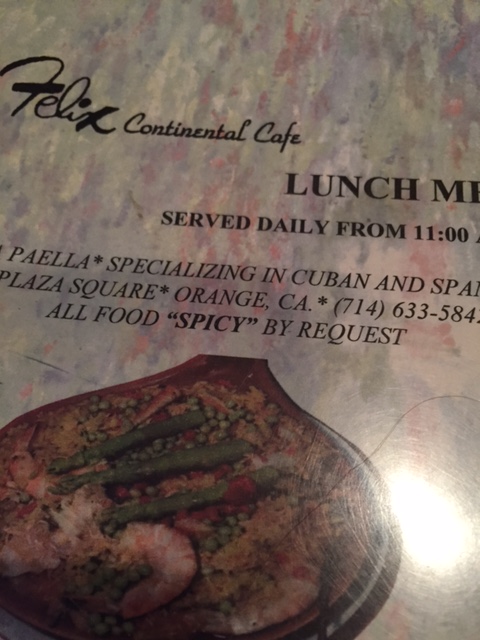 With the music playing a wide range of hits by Chirino, Hansel y Raul and  Celia Cruz, plus the waiter speaking to us in Spanish, I totally got swept away in the moment and at the end of my meal ordered un cafesito.

“No, un cafesito,” and I threw the universal Cuban gang sign for un cafe.

He came back with a monster cup of agua sucia American coffee, which woke me up from my Little Havana fever dream. As I resigned myself into having it, my spoon brought up a swirl of coffee grounds from the bottom of the cup, so I called him back and asked him to bring me an espresso. Neither drink was great. I took a sip of each and instantly regretted it. I didn’t want that to be the last taste in my mouth, so I ordered dessert – which is what led me to the most incredible discovery…this place has the best flan de leche ever.

It was as if I was having my abuela’s flan. En serio.

The portion was out of control too. So tall and with tons of caramelo. For some reason they put a dollop of cream on the top for decoration, which was totally unnecessary because it was already a sight to behold.

If you go: Felix Continental Cafe is located at 36 Plaza Square in Orange. You can find free parking at Olive and Almond if you’re lucky. There is indoor and outdoor seating and the restaurant does serve wine and beer.

What to have: Obviously flan for dessert. The frijoles were fantastic, but the white rice was a little under-cooked for my taste. The palomilla was perfect with lots of onions and the carne con papas was totally on point and generous. Also have patience, while the cuisine is Cuban heavy, the service is a celebration of Spanish culture. It’s slow like dial-up.

What not to have: Rabo encendido. You shouldn’t be sucking on ox tail outside of your house. Don’t ask the waiter if they have mofongo because that’s a dish from Puerto Rico, which is not Cuba or Spain. And last, skip the coffee. If you insist, there’s a Starbucks two doors down. You’re better off there.