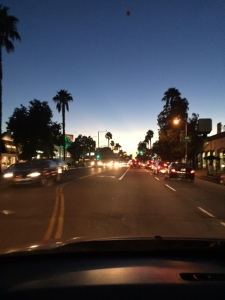 “I live on Hazeltine,” I told a new friend, only to be immediately corrected. “Honey, you live here now, it’s pronounced Hay-zel-TEEN.”

Bueno, but that’s an English word, at least I’ll have the Spanish ones down, or so I thought.

It turns out that my super Spanglish is absolutely no use, as every sign across every highway, and every street in every city is pronounced exactly opposite of how it naturally comes out of my mouth.

The list is never-ending. San Pedro is pronounced San-PEE-droh. And I keep rolling the first r in Redondo Beach and the middle r in Hermosa Beach. Most egregiously, I can’t properly get anyone to understand me when I say Los Feliz.

Luckily, these embarrassing language fails can be easily corrected. I’ve found the best way to learn the local pronunciation is to eavesdrop on conversations at Starbucks.

While sipping my flat white (if you close your eyes, it’s a cortadito) and pretending to type on my phone, I’ve learned how to properly pronounce the names of boulevards. For instance, Wilshire is WILL-sure and Pico is PICK-ouuuuuuh.

I’ve also learned the word Santa, as in Santa Monica, appears to have three syllables, like the letters S and A have an imaginary ‘HA’ after them: SA-HAN-ta MO-ni-ca. This is exactly the opposite of RUNYON, as in Runyon Canyon, which gets pronounced in one quick grunt, RU-yn or RUR-n, but that could’ve been my straining to hear over a barista’s zealous foam party.

Here are a few more, practice at home with me:

If you go to Starbucks: Order a tall flat white with two extra shots of espresso. Yes, I said two.